October 2011 - Sailing boats on the Windrush in Bourton 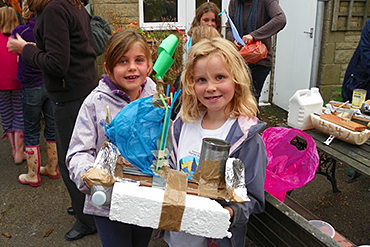 For two great evening activities from Cheltenham Elfins and Pioneers. First you need a big pile of junk craft material, some helpful parents, some enthusiastic children and a child friendly river close at hand. Fortunately we have all of these. The first evening was spent building the boats, which included a tin can to put a parafin wick to light the boats up for our second evening sailing wading and splashing about.

40 young members and parents turned up to light the torches and sail their boats through Bourton-on-the Water as the evening got darker. Molly aged 10 says "I really liked going in the water and having splash fights and getting wet, also I liked going under the bridges and in the deep water". Lucy (aged 7) said "I really enjoyed playing in the water at the end; really really fun especially when the water got really deep". Lucy's Mum said "It was a really special evening and something we would never normally do, the sight of the boats with their lights floating down the river was lovely". Simon our new Elfin Dad thought it "a fantastic idea". 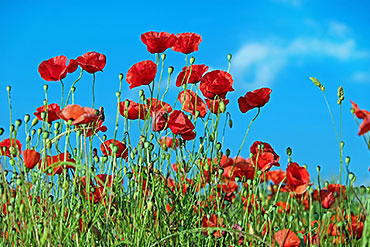 We very nearly ran out of points last Monday after you all came with so many facts about the white peace poppy. I am sure you all earned some points - here are a few of the facts: Henry earned his by telling us the peace poppy dates back to 1926, the year after Woodcraft Folk started; Nicole said they were used to remember all people killed in war, soldiers and civilians and on both sides of any conflict; Archie earned his points by knowing that the white poppy was first worn by widows who lost their men in war and wanted wars to stop; Ruth said poppies were used to remember the dead because they grew on the battle fields where soldiers were killed. Well done to all of you - and please look after those points.

The annual charity bring and buy sale with the Elfins and Pioneers raised a magnificent £90 yesterday (12th Dec 11). Congratulations to all those who emptied (and filled again) their toy cuboards in aid of a charfity of their choice. Having estblished that so much money had been raised the group then nominated and voted for their favourate charity. This year, with 20 votes, the group chose 'Well Child' (http://www.wellchild.org.uk/) and a cheque is already on its way.